While I wait impatiently on Election Day, I decided to prepare my favorite Indian dish – a spicy, savory chickpea tomato based curry, and sweet delicious quinoa with cranberries and almonds. Looks pretty tasty, right? It’s not only delicious, but it’s super cheap, and super easy.

a little olive oil – to cook the onions, garlic and ginger

veggie broth – two cups, maybe three depending on how long you cook

handful of cranberries – I prefer to unsweetened ones, but they are sometimes difficult to find

Give yourself about 30-45 minutes to cook. First start on the curry. Chop up the onion, garlic and grate the ginger. Add all of it to a pan with a couple tablespoons of olive oil. Cook it up til the onions soften. About 10 minutes. 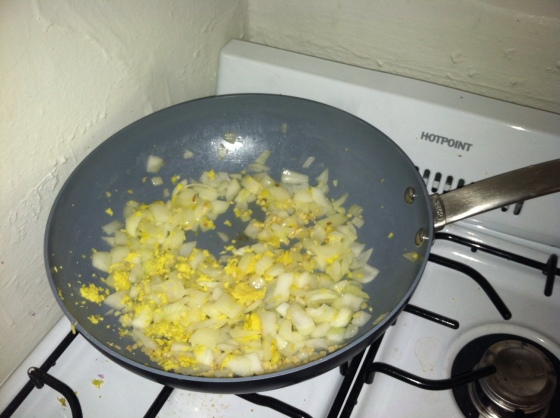 Next, and this is the tricky part, open up the cans of tomatoes and chickpeas. Pour em in. Add the veggie broth. Then add the turmeric, coriander, cayenne pepper, and cumin. Stir it up. Ha – I told you, this is a super simple and inexpensive meal. Initially the spices cost a bit, but they last forever. 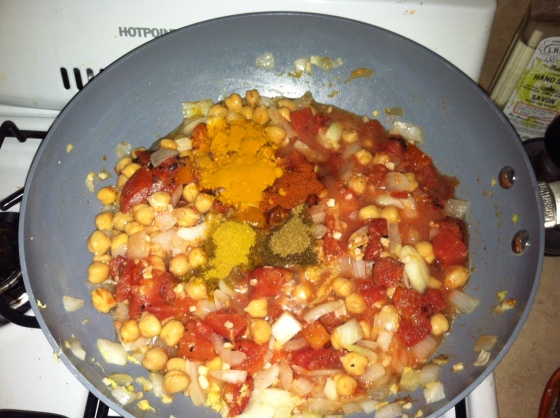 Cover and stir occasionally. After reaching a boil, turn down the heat, and let it simmer for about 35 minutes. In about 20 mins, start the quinoa. Add the veggie broth, quinoa, cranberries, almonds, cinnamon stick, and bay leaves. Reach a boil, then cover and simmer for about 15 minutes – until the broth is gone, and the quinoa has a white rind around the grain. 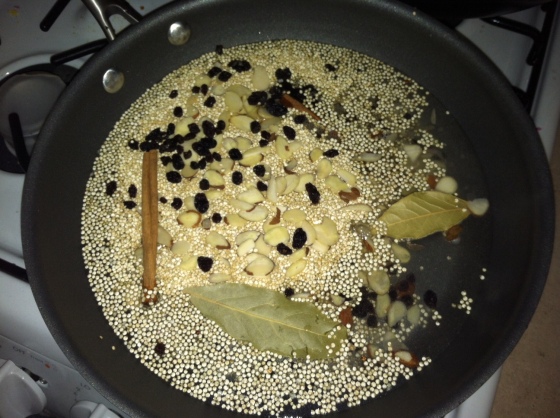 A couple notes – I didn’t have cranberries this time, so I substituted currants instead. Turned out ok, but wasn’t as sweet. In fact I added a little Raw Stevia to balance out the cayenne pepper I overdid. I think I’m trippin over the election. In addition, I totally forgot to add the veggie broth to the curry. Fail. It dried up super quick, and the chickpeas weren’t as soft as they should’ve been – it also didn’t take a lot of time for the curry to cook. Kinda gross. So I added a little broth and let it simmer a little more. Much better. I’ve seriously made this dish half a dozen times, and today I screw it up.

Hmmm anything else I forgot? Don’t think so. This dish is served nicely with naan, if you aren’t stressin’ about carbs. It’s also nicely paired with sliced pears in cinnamon and honey… again, a nice cooling taste to add while eating this spice-rich meal. And oh yah – it’s vegan, and pretty healthy in it’s fat-carb-protein ratio! Enjoy!